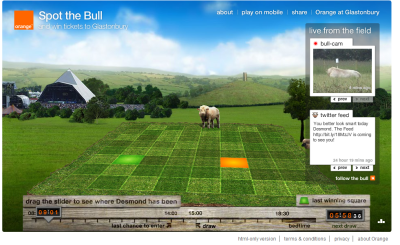 This latest banner campaign by Orange is interesting as it boasts a number of creative innovations which sets this apart from your run-of-the-mill banner campaign.  The ad is a basic competition mechanic to win tickets to Glastonbury but the way they have executed this is particularly intriguing. They’ve created a 3D banner which hosts a variety of technical wizardry including Papervision3D, Flash AS3, a live two-way data feed & even GPS tracking of the bull which is relayed back into the ad. The ad has been created by Poke and Unit 9 with media planned & bought by Mediaedge CIA.

Of course, Orange is not alone when it comes to using music to attract a younger demographic. O2 run the Blueroom for priority access to music events and T-mobile created Street Gigs a while back, not to mention the well documented karaoke flashmob which I reviewed recently.  What I find interesting is that whilst they are all aligning themselves to music to connect with the younger generation, they’ve all adopted vastly different marketing strategies in an attempt to differentiate themselves. As the ‘Spot the Bull’ campaign illustrates, it’s not necessarily what you say that’s important as how you say it.

Error: Twitter did not respond. Please wait a few minutes and refresh this page.