Facebook Timelines is opening up a range of new and exciting opportunities for brands to express themselves and engage with their fans. One aspect I particularly like is the timeline itself where brands can retrospectively publish posts to mark important milestones in their history. It’s a great way to showcase a brand’s heritage as well as reflect on its remarkable journey to the present day.  But it also acts as a virtual time capsule from a bygone era and can be strangely engaging in its own right, particularly for those who are passionate about your brand and its distant past.

But perhaps most important of all is that it creates the perfect environment for storytelling and rekindling some of those brand mythologies which make up its DNA. So here are some of the best examples I’ve seen to date but feel free to add to the list in the comments below.

Louis Vuitton has been around since 1856 so they have a rich history of interesting stories to draw from to add context to their brand, from the time they opened their first workshop in Paris to some of their first innovative designs which have helped to define the luxury luggage category. 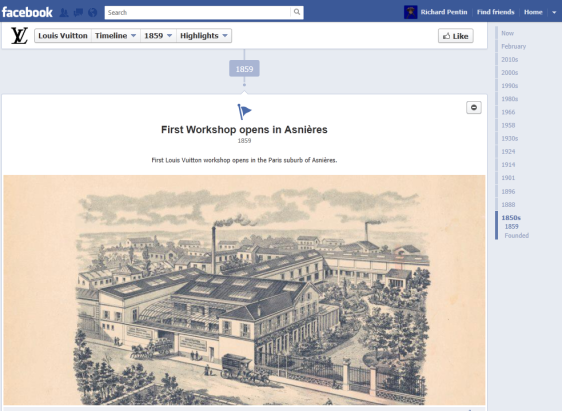 The New York Times will have a huge back catalogue of worthy newstories to choose from so I imagine it was quite a job to distill the best ones.  They appear to have documented the history of the paper mixed in with events of the time so you can read about when Marilyn Monroe paid a visit to their newsroom to when the very first crossword puzzle was published.  What I like about this timeline is that they’ve actually tried to humanise the brand rather than simply provide an archive of all their achievements.

Once again, Ford pave the way in social media to show how automotive brands can use Facebook Timeline. They’ve made the most of their long history and backfilled their timeline with important milestones and achievement in automotive history, dating back to their inception at the start of the last century.

Coca-cola was founded way back in 1886 so they’ve charted their history by showing how the soft drink seemlessly fitted into the daily lives of American society at any given point of time, whether that’s couples who met over a glass of Coke during World War II or drinking Coke whilst watching the first man go to the moon.

Like Louis Vuitton, Burberry has been around since  1856 and have a rich history of stories to recount from opening their first store in Basingstoke to intrepid pilots from 1919 wearing Burberry Aviator suits for their first transatlantic flight. 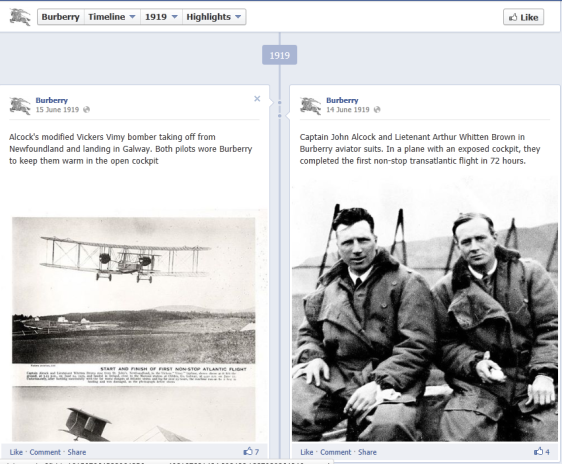 I’m not really a football fan and if I was I doubt I’d support Man U! But supposing I was fanatical about this team I’m sure I’d enjoy dipping into their Facebook timeline to see my childhood heroes lifting the FA Cup. 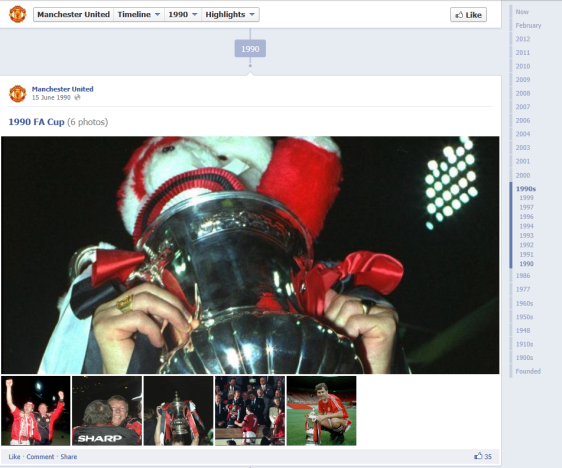 And finally, for all those Coldplay groupies out there you can look back at their meteoric rise from rather more humble beginnings!

Error: Twitter did not respond. Please wait a few minutes and refresh this page.