This clever idea by Tesco in Korea works on so many levels:

So many brands have jumped on the ‘Augmented Reality bandwagon’ that it’s in danger of becoming old hat already.  But every now again you see an execution where it all comes together brilliantly.  This latest campaign by Lynx Excite is a case in point.  What I like about it is the way they’ve seamlessly extended the big idea behind Fallen Angels and used AR to bring it to life, rather than relying on the technology to dictate the big idea.  I also think AR works best when used in experiential environments  like this as consumers get to enjoy the full virtual experience without having to overcome the usual barriers to entry, such as having to print out the AR code or switch on webcams.

This content was posted on the Lynx Effect Facebook page (managed by TMW) which already has over 200k social handraisers.  It’s definitely worth a peek – not only is it a good example of how to produce engaging content to build and cultivate an active community but it also features plenty of Lynx girls in various forms of undress 😉

The automotive industry were one of the first industries to embrace AR within marketing communications so it’s probably not surprising to see Audi now taking full advantage of this technology to promote the A1. 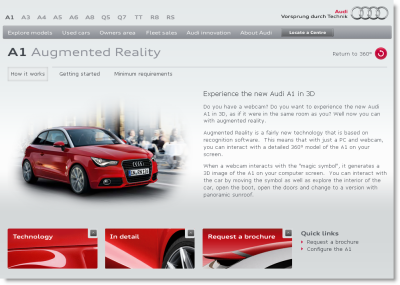 What’s interesting for me, however, is that they’ve integrated AR within their main website so that it will remain a permanent feature for that model. In this example, you can add a panoramic sunroof, open doors and explore the interior or even take it for a virtual spin. Admittedly AR can be a bit gimmicky for some tastes but I like the fact that people have the option to interact with this if they choose to do so, in much the same way that some prospects prefer video content whilst others devour technical specs.   Also, now that it’s a permanent fixture on the site they should be able to include the AR code on other marketing collateral to help drive offline prospects online.

If Audi can demonstrate that AR is well received with some online personas and improves their conversion rates, I wouldn’t be surprised if they roll this out for all future product launches.

If you want to read my other posts on Augmented Reality click here.

I love this as it’s a great example of thinking outside the box.

This unorthodox cinema ad for the Nissan Micra C+C Convertible challenges the very conventions of advertising on the big screen by projecting the ad directly onto the ceiling. What a great way of bringing the product USP to life.

You can find more details here in the Inspiration Room

Amnesty International have developed this very impactful, digital billboard campaign to raise awareness of  domestic violence.  It’s built on the simple insight that most domestic violence happens behind closed doors and is hidden from view.

However, it’s the clever use of eye-tracking technology which really brings this insight to life.  Whenever a person in front of the poster looks in its general direction they see a normal looking couple pretending to look happy. 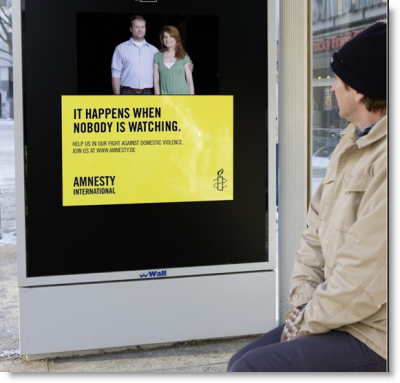 It’s only when the person looks away that the poster changes to a much more alarming scene. 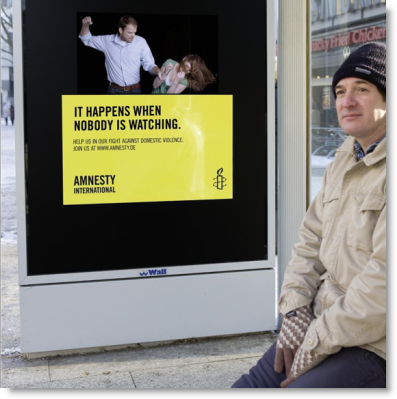 What I find interesting with this campaign is not just the impressive eye tracking technology but rather the simplicity and single-mindedness of the whole idea.  The insight is hardly a revelation but it’s rooted in a consumer truth and is inspiring enough to act as a creative springboard from which to produce great work.  Sometimes it’s not the originality of the insight feeding into the proposition which makes for a great campaign – although that can help – but rather the creative scope and freedom it provides to generate a big idea.

Thanks to my fellow planner Olly Spalding for telling me about this compelling campaign. 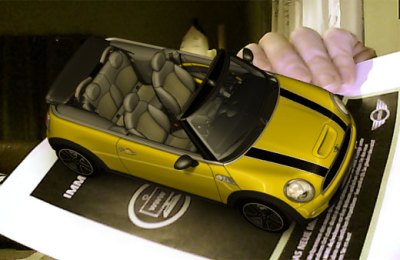 Augmented reality (AR) is a fascinating field of computer research which combines the real-world with virtual reality and computer-generated data. This leading edge technology is being increasingly adopted within the interactive marketing arena, so I thought it might help to provide a summary of the different applications I’ve come across to date.

Now that we live firmly in the digital age, you may be forgiven for thinking the traditional print ad just doesn’t cut the mustard anymore!  Take the Mini Cabrio Augmented Reality campaign, for example. As part of the model launch they created a full page print ad which contained simple instructions on how to transform the page into a 3D virtual model of the car.

They placed the ad in three German automotive magazines including Auto, Motor und Sport, Werben & Verkaufen and Autobild.  You can check out the results in the video below or if you want a go yourself you can print out a PDF of the ad. The campaign was created Buzzin Monkey and die agentour GmbH.

The following example demonstrates how versatile AR can be as a way of making brochure fulfilment more engaging and interactive. Here, consumers can fully interact with the brochure to change the colour of the car and even review the interior in 3D.  Might make you think twice before churning out yet another 6pp DL fulfilment leaflet!

Some times it’s not the actual product itself which is dramatised but rather a conceptual idea designed to create buzz or word of mouth for a particular campaign.  For example, to help promote the latest Star Trek movie, they created this holographic tour around the USS Enterprise, including basic interaction such as firing laser guns or experiencing warp speed. I’m sure any geeky Star Trek fans are simply going to love this.

Samsung have also just launched a spoof online campaign for the Samsung Mini Notebook N310 where they superimposed two ‘morphic’ characters onto some camcorder footage previewing the notebooks at some tradeshow.    This is perhaps the most passive application of AR as there’s no user interaction as such but it still demonstrates how the technology can be applied to dramatise a particular campaign idea.

AR obviously comes into its own when you need to demonstrate a product, particularly if the product is too complex, large or expensive to present in the flesh.  So the sort of industries this may appeal to include automotive, construction, interior design, fashion, luxury hotels and financial services to name but a few.

Infiniti, the premium car brand, for example, created an interactive kiosk last year where passers-by could literally control the angle and perspective of the 3D moving vehicle by adjusting the card in front of the screen.  Ironically, this would have generated far more consumer engagement and buzz than simply showcasing the car.

Some times it’s hard to envisage what a product may end up looking like when it hasn’t yet been assembled.   This was the problem faced by LEGO whose products are obviously composed of tiny individual pieces.

To overcome this, LEGO, in partnership with AR specialists Metaio, installed interactive terminals in key shopping locations so that children could hold the LEGO boxes up to the screen and see a 3D animation of the product inside the box. What a great way to get kids excited about your product. 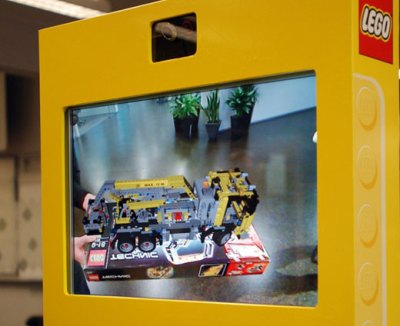 iLiving, a furniture manufacturer, has also cottoned on to the fact that they could apply AR technology to help customers visualise how iLiving furniture may look in their own living room.

This simple example from Rayban effectively demonstrates how product visualisation can help to facilitate the buying process for consumers who are shopping online.

While the idea behind AR has been around for a while, it is the number of mobile phone apps utilising it that have really pushed the technology into the limelight. Wikitude AR Travel Guide is an application specifically for the Google Android that turns Wikipedia into a location-based service. This means you can point your camera at anything around you, and using GPS to get your whereabouts, the app is able to pick up info about places of interest in your area so you can get clued up. Genius.

The above examples hopefully show the versatility of this technology and how it is starting to be adopted across multiple platforms, whether that’s via print ads, brochures, websites, interactive kiosks or even mobile phones.

The challenge for marketers is not to let AR dictate the idea but rather start with clear marketing objectives, consumer needs and insights, a campaign proposition and a perhaps the seed of a creative idea and see whether AR can help to bring this all to life.  At the end of the day there’s no point incorporating this technology unless it provides a clear, demonstrable benefit for the consumer and addresses your core marketing objectives. However, I hope that by identifying 6 clear applications for brands that this gets the creative juices going!

Finally, I’ll leave you with this interesting example which sadly doesn’t quite sit within any of the above categories but worth sharing anyway.  It shows just how far one can take this technology with a little bit of creativity and inspiration.

Every now and again one comes across an ambitious interactive campaign which has so many technical challenges and potential difficulties that you’d understand if the initial idea never made it off the starting blocks.

So you have to admire this Brazilian campaign created by Agencia Click for Fiat Punto who have ingeniously managed to create a virtual online racing game with a rather unusual twist. Instead of your opponent being another online gamer you are actually competing against a real racing driver on an actual circuit.

Using various data feeds, GPS tracking, on-board cameras and CGI modelling they have managed to integrate the real car into the virtual racing game so that one can effectively test one’s driving skills against the professional driver.

I can’t tell how they organised the online event as the T-racer website is mostly in Portuguese I’m afraid. However, they did manage to maximise publicity for this campaign by creating a life-size simulator and convincing Big Brother to use this for one of the challenges in the show. Not a bad way to generate some extra PR! 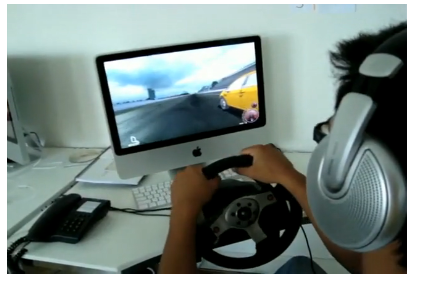 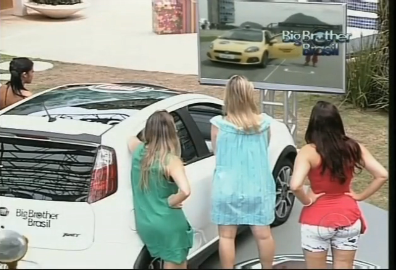 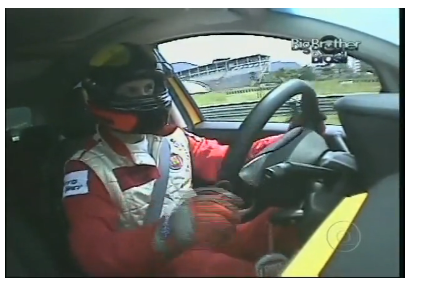 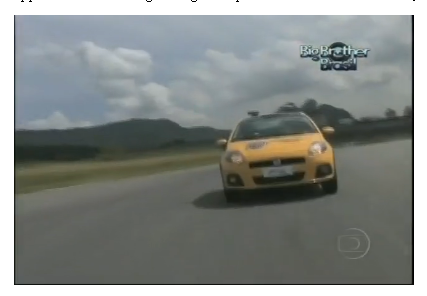 The real car as seen by the online contestant 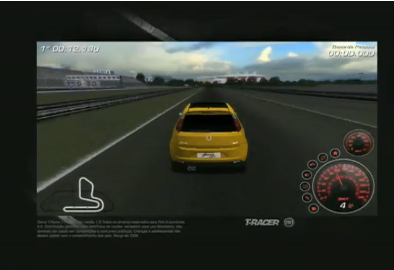 We’ve all seen racing games before.   But what sets this campaign apart is the way it succeeds in blurring the lines between reality and the virtual world to create a new consumer experience which captures the public’s imagination.

What I also like about this campaign is how it seamlessly combines interactive marketing, digital live events, experiential marketing and PR all rolled into one! Not as easy as it sounds.

It takes agency dedication, commitment, meticulous planning and technical expertise, not to mention a brave client to see something like this through to fruition.  So I was pleased to see it’s won Grand Prix at Wave in recognition for their efforts to go that extra mile.

You can watch the video here if you want to know more although you may need to brush up on your Portuguese first!